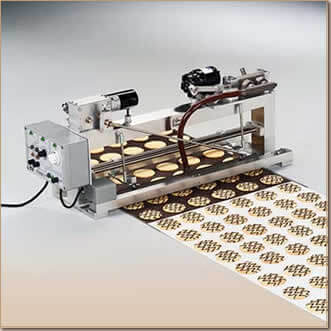 Woody Associates, Inc. has provided automatic decorating equipment to the confectionery industry for over 60 years.  As a staple in modern production, the Woody Stringer has the ability to produce zigzag, curved and looped design patterns to bakery and confectionery items in a fully automated system.

Each Stringer is custom designed to meet the individual needs of the user.  We will utilize factors such as line speed, width and the desired decoration pattern to produce a machine that will exceed expectations and withstand the test of time. The Woody Stringer can be designed to decorate on a conveyor, over a gap or fitted in an enrober. Many machines in use today are more than 40 years old.

In 1954 Woody Associates was founded as George D. Woody Associates, a consulting firm specializing in production issues the confectionery and textile industries faced as they related to automation. Through his experiences as a consultant, George Woody recognized there was a need for automatic decorating machinery.

First produced out of his Atlanta home in 1956, the Stringer proved to be the solution.  This new automatic decorating device was capable of adding zigzag decorations in an array of thicknesses on top of confectionery goods. 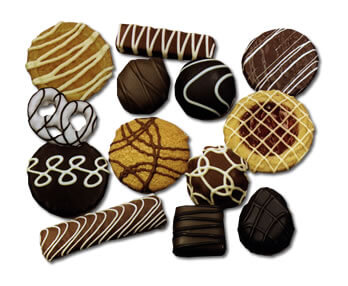 As time progressed so did the abilities of the Stringer.  During the 1960’s new capabilities were added to the Stringer in the form of the Single-Loop Attachment. This upgrade allows the stringer to create circles, ovals and slanted zigzags.  In 1974, the Double-Loop Attachment was born, allowing users to create figure-eight and cross hatching design patterns.

Due to an increase in demand for the Woody Stringer, George Woody moved the business to York, Pa. for manufacturing in 1974. York’s close proximity to major industry locations such as Hershey, Pa., Baltimore, Philadelphia, New York and Washington, D.C. made it a prominent choice for relocation.

Woody Associates was awarded the Presidents’ E Award in 1981. The award is given to businesses that show significant increases in exports over a three year period.

Harry A. Reinke, III took over as the president of Woody Associates, Inc. in 2002 and has since moved Woody Associates into a larger manufacturing facility in 2005 and again in 2020.  The last move was to their current location in Red Lion, PA, which is about 8 miles (13 km) from their former York, PA location.